» WorldTravelMagazine » In The News » TULUM – A MAYAN PORTAL IN TIME

TULUM – A MAYAN PORTAL IN TIME

Cancun is a cosmopolitan city reminiscent of Miami’s trendy and glittering South Beach. Whereas, Playa del Carmen is a small fishing village by day and an international hotspot by night.

Cancun is a cosmopolitan city reminiscent of Miami’s trendy and glittering South Beach. Whereas, Playa del Carmen is a small fishing village by day and an international hotspot by night. Both cities evoke modern sensibilities and amenities. But where does one go to experience the history of the pre-Columbian Mayans? You could go to Chichen Itza. But if your vacation in the Riviera Maya is fleeting, then I recommend the ruins at Tulum.

My first visit to Tulum was in June of 2010. I had just graduated from my master’s program and had gone to Mexico City for a job interview. Since my birthday was also in June, along with another classmate, we decided to make the trip a celebration vacation. Four of us found ourselves in the sunny Mexican Riviera enjoying the sun, the beach, the drinks and the cuisine. However, at some point, being just recent graduates, we decided we should do something cultural as well. So off to Tulum we went!

Geographically, Tulum is located about 80 miles or two hours south of Cancun and about 40 miles or one hour south of Playa del Carmen. Culturally, it is located 500 years in the past. It’s perfect location is well-situated for day trips to Akumal, Sian Ka’an, the ruins at Cobá and several cenotes. There are many sources of transportation available to reach Tulum – group excursion, car rental, taxi, colectivo or ADO. We decided to take the ADO bus as it was inexpensive, timely and easily accessible. Once the bus drops you off on Highway 307, it is a mile long walk or bicycle ride into the ruins. There is a nominal fee of about 40 pesos to enter, a little extra if you have a video camera.

Tulum is breathtaking. It was one of the last cities built and inhabited by the Mayans during the years 1200 – 1500 A.D. Tulum was still a hustling and bustling town when the Spaniards arrived. The name Tulum means wall or fence which is appropriate given it is one of the few Mayan cities protected by a wall. Tulum was also the only Mayan city built on a coast. On the coast side, it was protected by steep cliffs facing the sea. On the other side, it was protected by a wall of about 12 feet in height. Historically, the Mayan site may also have been known as Zama, translated as City of Dawn, because it faces the Caribbean during sunrise.

Every Mayan city served a specific purpose, and Tulum was no exception. It functioned as a trading port and seaport for Cobá, trading mainly in obsidian, turquoise and jade. The coastal setting also allowed the city to defend against invasions which is one of the theories regarding the wall. Another theory suggests only priests and nobility lived inside the city’s walls, while peasants resided outside. However, archaeologists still do not know why the wall was built. And the Mayans took their secrets with them when they abandoned Tulum.

But what the Mayans did leave behind is one of the most well preserved ruins in Mexico. This distinction is what sets Tulum apart from other ruins such as Chichen Itza or Cobá. The Castle or El Castillo is the tallest building at the site (pictured above). The structure probably served some navigational purpose such as helping the Mayans circumvent breaks in the reef or to stand vigil for incoming vessels. Hence, it is sometimes also called the lighthouse. The Castle has a commanding presence on the bluff and an impressive view of the coastline in both directions. 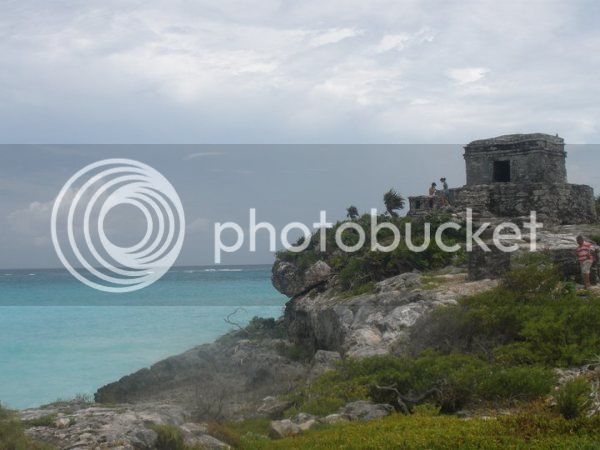 The God of Winds Temple or El Templo Dios del Viento (pictured above) is magnificently poised on the bluff overlooking the Caribbean. It also offers exceptionally spectacular views! The temple strategically guards Tulum’s bay entrance via the sea. The Temple of the Descending God or El Templo del Dios Descendente (pictured below) is another remarkable structure. The building’s outer façade depicts a figure sculpted head down. It is thought to signify a deity worshipped by the Mayans of Tulum.

One of the better preserved buildings in Tulum is The Temple of the Frescoes or El Templo de los Frescos (pictured below). Unfortunately, you are no longer allowed to enter the temple; however, you can peek inside to see the murals. As its name suggests, there are several frescoes painted on the walls inside the building. The first level depicts the Mayan view of the underworld, the second level depicts life on earth and the third level showcases their creator and other deities. It is also believed that the Temple of Frescoes was used as an observatory to track the positions of the sun.

When you are done touring the ruins, don’t forget to get friendly with the current residents of Tulum! Iguanas are everywhere! These amazing reptiles come in all shapes, sizes and colors. They are always ready for a photo op!! You can get pretty close to them to take a picture or you can use your zoom lens if you are a bit wary. I would not try to pet them or feed them as they will resort to defensive tactics including spitting at you. However, they are not generally aggressive if you just walk by them or take a snapshot!

Finally, what also sets Tulum apart from the other ruins is it boasts its own inviting beach. The beach at Tulum is one of the most beautiful beaches in the Mexican Riviera. Many tourists take advantage of the turquoise waters to go swimming after touring the ruins. It’s a breathtaking way to refresh yourself after a hands on history lesson and tour! So don’t forget to bring your swimsuit and sun protection. While Tulum may not have the largesse of Chichen Itza or the steep temple climb of Cobá, it still soaks you in rich history. And then delivers a fantastic cliffside view overlooking the gorgeous Caribbean Sea!!